Out of Warranty... bad stepper motor

My Glowforge Basic is old. I’ve had it since the dawn of shipments.
I won’t say I have read the whole OpenGlow forum, and I am not sure how to go through the resources on github. I’ve known y’all are here since you started; but I’m ok with the out of the box arrangement over the wireless network. I’m ok to use as intended, mostly. (dremel the fan will happen in conjunction with my new problem.)

I’m fairly certain my stepper motor is bad. Glowforge service says that they can’t remotely diagnose, and I can send it to them for service.

I’m pretty sure I don’t want to pay for the insult of putting my glowforge in the hands of any delivery company out there.

I’m about to dig in and order a new stepper motor; but does anybody have advice, experience, directions in this particular fix?

I have never known a stepper motor fail ever. I have used 3D printers for 12 years and worked for 29 years for a gaming machine manufacturer that used millions of cheap steppers.

They are easy to test when disconnected. The shaft should rotate fairly easily until you short the first pair of wires, or the second pair of wires.It should become much stiffer with either coil shorted. Usually the pairs are next to each other on the plug.

If both coils have continuity and the shaft isn’t jammed there isn’t a lot else that can go wrong. What are the symptoms?

Lateral movement skips on cuts and on engraves.
We cleaned the belt and rollers.
The stepper motor seems the likliest culprit; but I am aware of your experience and I would love your take on it.

Some art to illustrate some of my fails lately: (I get only one.) 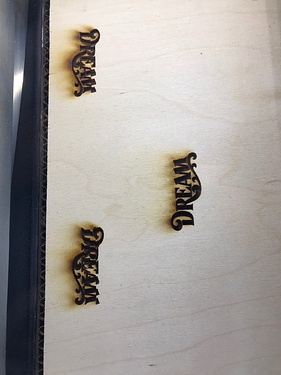 As you slide the carriage laterally on the rail, it isn’t smooth. It clearly has noticeable high friction and smooth sections.
Remove the belt from the roller and the stepper, and it moves smooth as anything. It isn’t the carriage, the rails, or the rollers on the carriage.

It seems that the stepper motor is the culprit because that’s what’s left in the lateral motion.

What distance is between the high friction and smooth sections?. It would have to correspond to one pulley rotation.

Can you turn the pulley of the motor by hand with power off? If so does it bind during part of the revolution?

It would be odd for a motor to bind unless it had been knocked. I once received one in the post that was binding and I fixed it by loosening the bolts that hold the end plate together and re-aligning it.

I also received one with a foreign body in it but that was also faulty on arrival. I removed the end plate and fixed it. I used to sell 3D printer kits, so got through thousands of motors. I only had one return from a customer and that had a bent shaft, so must of been dropped.

They do have replaceable ball bearings in them but as they rotate slowly by bearing standards I have never known them to wear out. Real 3D printers do very high mileage compared to 2D machines, so I can’t imaging them wearing on a laser cutter unless the belt was so tight it exceeded the radial load spec. Even then I would expect long life as bearings are rated for millions of revolutions.

your former response had me going back through…
I cleaned it MORE.
Dental pick in the grooves… pipe cleaner between the pulley and the arm.
way more detail in the cleaning.
You saved me lots of cash and lots more pointless troubleshooting.
Ash and sediment was jamming my joints.
First test print came off well.
I might be back in business.
Thanks for educating me about the stepper motor. I’m duly impressed.