I just sent off OpenGlow Prototype v2 to the board house, and I’m turning my attention to the head.

Rather than spend a enormous amount of time reverse engineering the existing design, I’m going to create a replacement.

Why? Well, the original design has some serious problems. The limited focus range/resolution being the biggest.

I’m thinking of taking one of the following approaches:

My thoughts are that there isn’t really a single part of the GF I wouldn’t do differently. That is why I decided to cancel and design my own.

The biggest problem with the head is the fan sucking in dirty air and making it necessary to clean the lens and mirror. It makes the sealed optical path and the easy clean windows a joke. I will be blowing clean air on my lens like every other laser cutter with air assist. They just run a pipe and use a relatively high pressure, low flow, diaphragm pump blowing a jet through a small nozzle.

I was in your shoes I think I would stick with the original head, at least to start with, and then perhaps hack the microstep configuration. I have no idea why the set it to half step and always step in full steps. I wonder if the change where they said they made focus more accurate now does half steps?

I would stick with the original head, at least to start with, and then perhaps hack the microstep configuration.

I’m leaning towards doing something along these lines initially.

Though, reverse engineering the head firmware is something I’m not really interested in doing.

Right now, I think I’m going to just whip up a quick replacement board that only drives the focus stepper, and has the sensor for the lens home position.

I don’t have much use for the head camera at the moment, so I am OK with skipping that for now.

only drives the focus stepper, and has the sensor for the lens home position

Though, reverse engineering the head firmware is something I’m not really interested in doing.

It doesn’t do much, so it should be easy to re-write from scratch if you can figure out the I/O.

It doesn’t do much

^^^ This can be said for much of the hardware in the Glowforge.

Truth be told, I’m starting to reach the point of Reverse Engineering Burnout. Whipping up another PCB with fresh hardware that I don’t have fight with is a very attractive path. 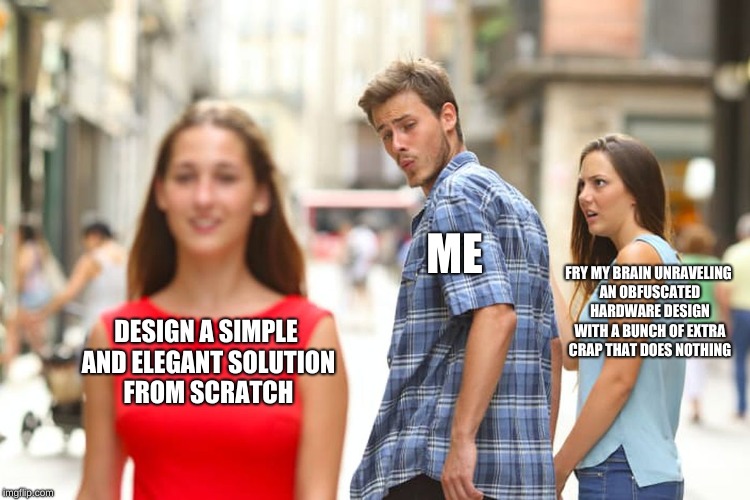 I like the sound of starting with the drop-in board. Later if you redesign a whole head, I assume you can reuse some of that design work, if not the layout work.

Thank you for keeping us updated.

Replacement Head PCB prototype 1 has been sent off to Oshpark. 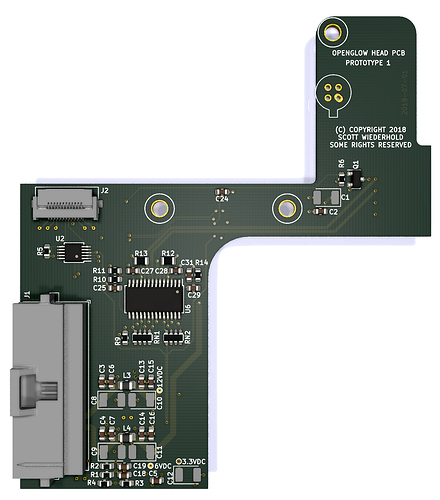 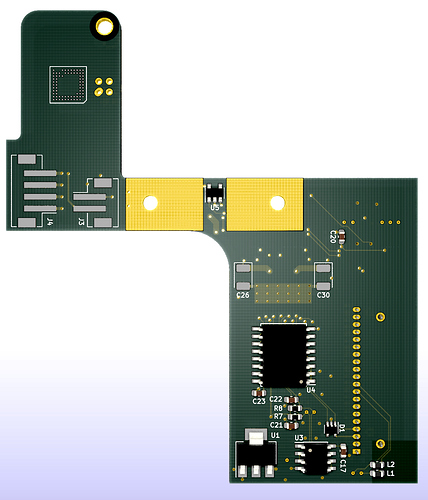 I’m mostly concerned with being able to control the focus and home the lens, plus run the fans.

I added the footprints for the IR detector and the image sensor so I can tweak their exact layout positions while I’m refining the board.

As this is super early in the design phase, I’m going to refrain from sharing the design specifics as they are probably completely wrong… 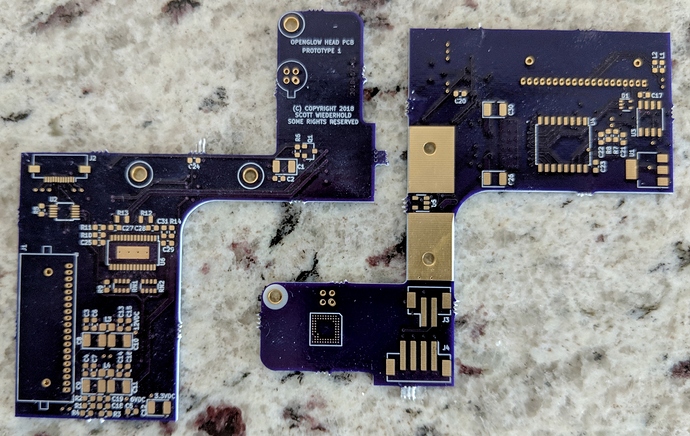 They fit pretty well, though the top screw hole is off by about a 0.5mm in both the X and Y: 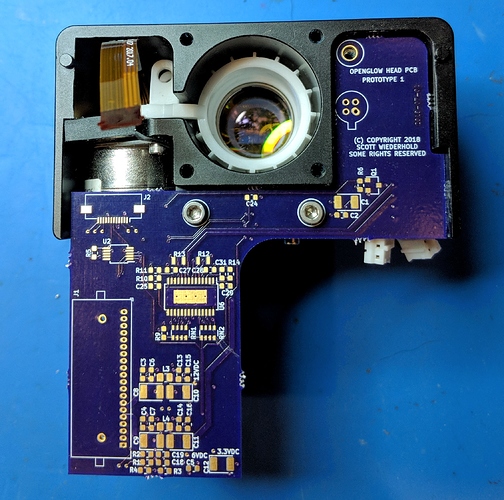 I’m going to spend most of my immediate time working on the software for the new control board, so I may not get to populate one of these for a few more days.

The other way round for me. I gained from the refund exchange rate but they didn’t refund quite the full amount. I am $26.5 down so I am waiting for an explanation. Probably just another incompetence. 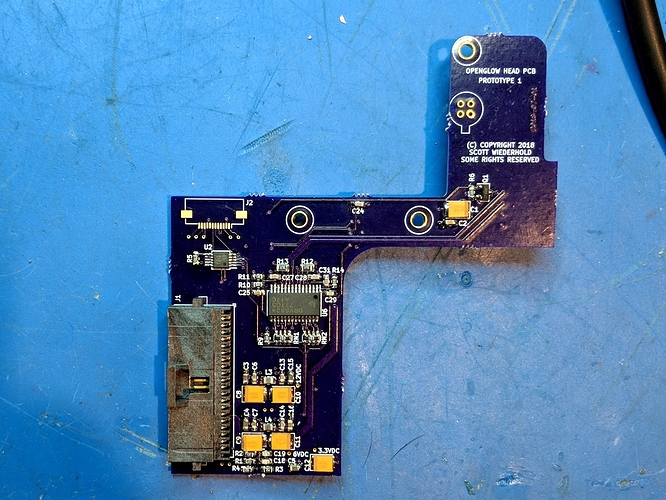 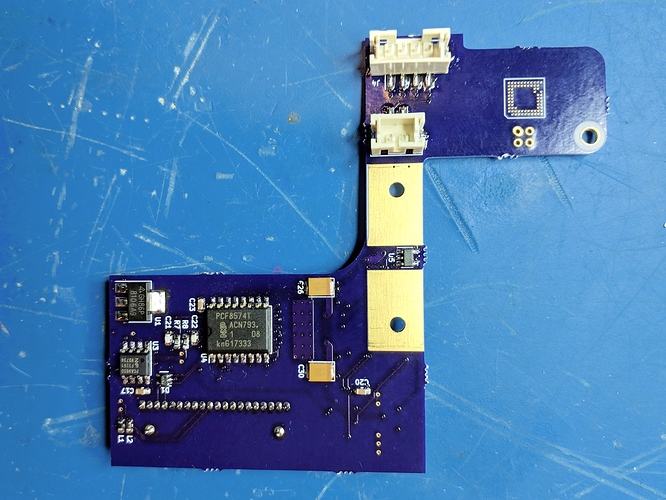 Not super clean, as it is entirely hand soldered.

If I were to cancel now the money I’d get back would be worth $240 less from inflation alone. Makes me powerfully angry.

Control of the focus lens is complete:

The video shows the driver in full step mode. It is capable of up to 32 microsteps.

The lens purge and air assist fans are now working as well.

The only thing left is the cameras.

Do you plan on working on the glowforge head since setback on power supply for the openglow control board?

I was interested in looking into altering the direction of the beam from 90 degrees down to something closer to 45 degrees to horizontal. Utilize the space in the glowforge for rotary capability. Not sure if there is any interest, but it seems it would be more “plug and play” accessible to more novice users.

Do you plan on working on the glowforge head since setback on power supply for the openglow control board?

Probably not. Without being able to fire the laser, I’m lacking a bit of motivation.

To make a custom head like you are proposing would not be too difficult. Making it compatible with the factory firmware/GFUI would be extremely difficult.

This may seem off the wall, but have you considered a go fund me campaign for a sacrificial machine. Probably a LOT of owners on the official forum (certainly the pre-order owners) would be interested in your work as their warranty dates are fast approaching. I certainly would…

have you considered a go fund me campaign for a sacrificial machine.

I’d prefer not to take that route. I’ve been offered financial support from a number of owners, and I’ve politely declined them all.

My reasoning is that I took on this project as a personal challenge. The exploration, discovery and learning have been very rewarding. Once I start taking donations I’ll start to feel obligated to make progress, and that will significantly change my view of the effort. Instead of an enjoyable (if not frequently frustrating) pass time, it will become work.

If Glowforge sold power supplies, I’d happily buy one. If they sent me one gratis because they think I’m a swell guy, that’d be ok, too. (Not a conflict because I wouldn’t feel the same obligation to a company that stands to gain from my work as I would to individual contributors who just want to improve something they already own.)

I’ll still occassionally tinker with the thing - just not nearly as intensely as I was.

Completely understandable, but if you ever change your mind I would be more than happy to help out either financially or mechanically. I’m a soon to be retired industrial/product designer. Thanks for all you effort.