Differences Between Pro and Basic Tubes

Is it possible that the tubes are actually the same but they’re running one at the higher wattage due to the better cooling? I haven’t seen anyone post a photo of aPro tube side by side with a Basic tube. I know a lot of industries do this - make a whole lot of something and then market the higher quality ones as rated to a higher level.

Yes it is entirely possible as 5W isn’t much different and the normal way to make a higher wattage tube is to make it bigger. They had to add a barcode label to tell them apart, so I don’t think there is any visible difference.

Also GF are the most dishonest company I have ever dealt with. I don’t believe there is any difference in the optics or the motion components of the pro either. They made the mistake of selling the windows, final mirror and lens with only one version for both machines. That means the only difference in optics could be the mirrors inside the tube and the first and second mirrors that are hidden in a metal box.

The motion components are pulleys, wheels, belts and motors. These all seem to be the same on the pro and Dan “has forgotten” what the difference is in the motion components that allow it to go 15% faster, when they get around to implementing that in software.

I emailed support to cancel mine yesterday, got the standard "Thank you so much for reaching out! " automated reply.

NOTE: I moved this discussion to a new topic to keep it from getting lost in the Free Control Boards! thread.

Here are some pic’s from my basic tube: 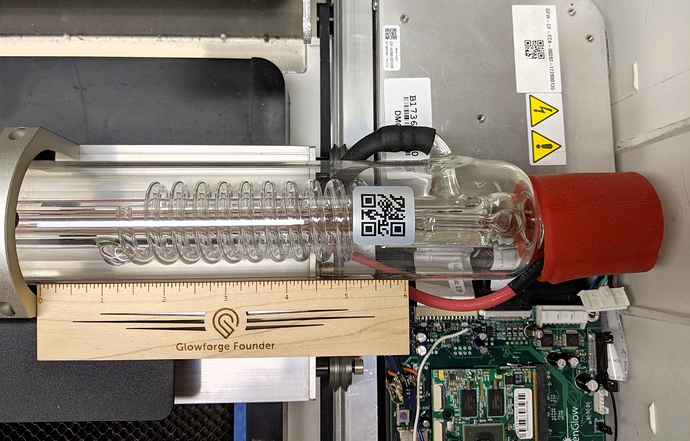 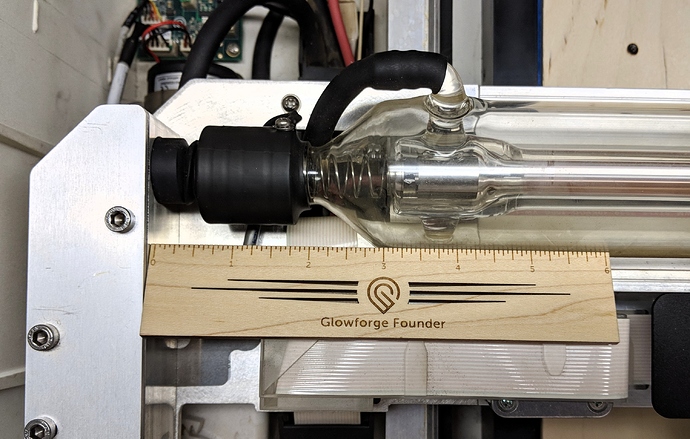 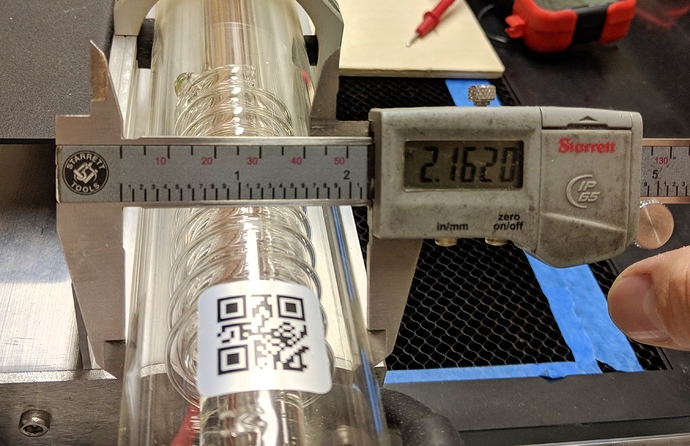 If someone with a Pro can take the same pictures and post them, we can compare.

The motion components are pulleys, wheels, belts and motors. These all seem to be the same on the pro and Dan “has forgotten” what the difference is in the motion components that allow it to go 15% faster, when they get around to implementing that in software.

If there are any differences, they have yet to reveal themselves. At this point, as is it difficult to prove the negative, I think it is in the consumer’s best interest to presume that they are the same until Glowforge proves it differently.

Differences Between Pro and Basic Tubes

until Glowforge proves it differently.

Except they always refuse to do that. We have to believe they are different in a way that Dan says he can’t remember and wont reveal when asked. It would be easy for him to prove the positive by asking his team to remind him what the difference is and stating it. Since both machines are out in vast numbers it can hardly be a secret.

How does one make axes go faster? Bigger pulleys or a higher supply voltage to the motors or lower inductance motors. I can’t think of anything else apart from software of course. And claiming software is a motion component is redefining English like you have to do to make a lot of their claims true.

Except they always refuse to do that. … Since both machines are out in vast numbers it can hardly be a secret.

The “competition would love me to reveal that” excuse has certainly ran its course.

I can’t think of anything else apart from software of course. And claiming software is a motion component is redefining English like you have to do to make a lot of their claims true.

We’ve already confirmed that the motors, pulleys, belts and control board are the same. I have to concur that the only real remaining “component” in the motion system is the software, hence the claim “enabled by a software update”.

They’ll likely stretch this claim the same as they did for the focus capability.

As to the optics, I haven’t opened the magic box for fear of screwing with the alignment, so I am not sure what it contains. This is from the patent application: 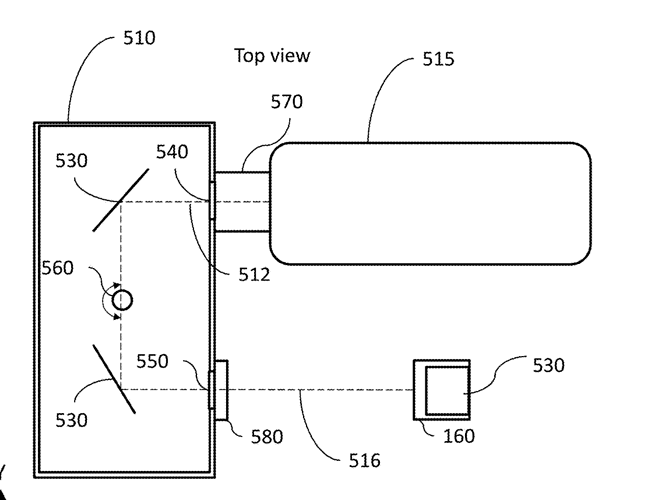 Item 560 isn’t defined in the application, but appears to be the rotational point described.

Maybe the Pro’s run fasterer and betterer because they use a higher quality Snake Oil?

The box just seems to be two mirrors, a window and a gasket. It aligns the mirrors perfectly at 90 degrees, which means the beam comes out parallel to the beam coming in. They say rotating about the pivot point displaces the beam in the Y direction but maintains it parallel in the XY plain.

99% of the patent seems to be waffle. They seem to be trying to patent having one or more fixed items in a CNC machine!

On my Basic, there is a ballast resistor mounted to the left rail: 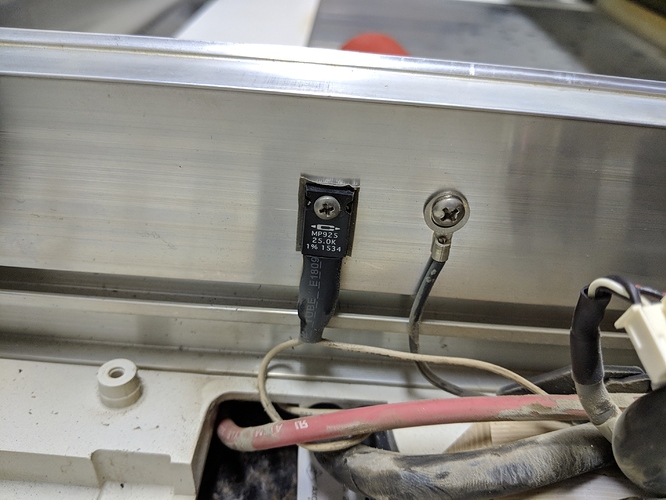 Can someone with a Pro see if they can snap a picture to see if they are same value? Should be able to stick a smart phone in there or use a mirror to avoid disassembly. 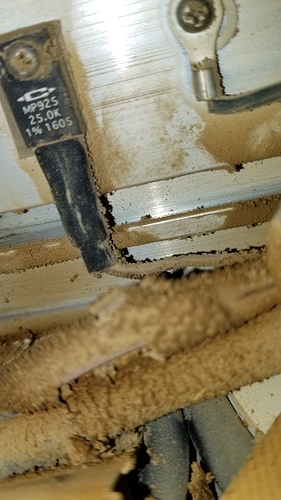 Confirming this is from a Pro. Looking forward to hearing what it means!

Looking forward to hearing what it means!

It’s a ballast resistor for the tube.

And, it’s one more thing that is the same between the Pro and Basic.

As I am currently working with the laser drive/power system, I’d be interested to see what the Full Power settings are in the motion files for various units.

If some people want to volunteer: import this svg OpenGlow_Text_Plain.zip (1021 Bytes)
into the GFUI, and set it for a manual score at FULL Power (not 100%). Speed doesn’t matter.

Then follow these directions to grab the motion file. Send me the file, and I’ll pull the power value out of it.

My hunch is that besides the obvious difference in values between Basic’s and Pro’s, there will also be variations between units to act as a calibration for individual tube performance.

Note: The power setting can only be found in motion files with scores or cuts. Engraves set the power at 100% and then pulse the laser to achieve the desired power level.

EDIT: Corrected the power setting. Should be “FULL” not 100%.

Here you go. This is from my Pro.

I wonder if the power setting is non-linear.

Or perhaps the tubes do have different max power, but they target each of them to output at their rated max power at around 80% of actual max power (to prolong tube lifetime).

My initial guess, without having any direct measurements yet, is that the PWM resolution is low - meaning that only 3 steps represents a significant power increase.

This may explain why they don’t use the PWM setting to control lower power values, and instead use a dithering scheme. It would give them greater resolution, especially if it is non-linear.

PWM probably controls the current linearly. Although a tube is more or less constant voltage, as long as it has some positive slope resistance the voltage will also increase, so the power increase will be a little more than the increase in current.

Maybe the 45W tubes are more efficient. Possibly they are the same tube but some work better than others, so they grade them.

A interesting test would be to also compare them at 100% to see the relative efficiencies.

An even more interesting finding:

I haven’t found a technical reason for this, other than to maybe deliberately degrade the apparent performance/speed of the Basic model. If you are watching them side by side, you would say “WOW! Look how much faster the Pro is!!”

They both take 7448 cycles from the start of X/Y motion until they reach the point where the laser first fires. So, at least they haven’t artificially slowed the ‘G0’ rapid move speed.

When I was looking at files from your basic some time ago there wasn’t any delay at the start. I think it was mentioned in the forums that a fan spin up delay had been added as it was much requested to stop smoke escaping at the start. I also think I remember some people saying they didn’t have it. Perhaps they simply forgot to add it to the pro? Their level of incompetence never ceases to amaze me. They still haven’t managed to refund the correct amount to me yet. They don’t seem to understand overseas wire transfer fees. Odd because I am sure I am not the first OS customer to cancel. Did everybody else just accept losing some Dollars?

45W * 5.04 / 5.71 = 39.7, which is very close to 40W. When they use software PWM the average power must be directly proportional to mark space ratio, so it seems that the pro tube produces more output power for the same input power unless there is some other difference, such as a PSU setting.

Perhaps the pro tube just has more expensive mirrors and everything else is the same. That would be hard to spot visually. It also explains the new plus model because that has pro power but not pro cooling. That shows the pro tube doesn’t need more cooling, which would be the case if it is more efficient.