Want to play with the motion files, but don’t want to go through the trouble of getting console access to your Glowforge?

You’re in luck! There is a way!

Fire up the GFUI using Chrome. Once your device has calibrated and your ready to print, right click somewhere in the bed image and choose “Inspect” from the sub-menu.

At the top of the inspection window, click the “Network” tab:

To make the next step easier, click the header on the “Name” column. This will sort them alphabetically.

Now, click “Print” in the GFUI. Once the scanning and preparing steps are complete and the preview window pops up, you will see an entry that begins with “motions_” in the listing in the Network window:

Right click this file, chose “Copy->Copy link address”. Now, paste this link into a new browser window, and the motion file will download.

For fun, you can also play around with the bed image de-warp feature. Find the entry that begins with “bed-image”:

Right click this file, chose “Copy->Copy link address”. Now, paste this link into a new browser, and you adjust the “focus_height” value. The valid range is 0 - 25 (I believe this is mm above the bed).

This is the raw image: 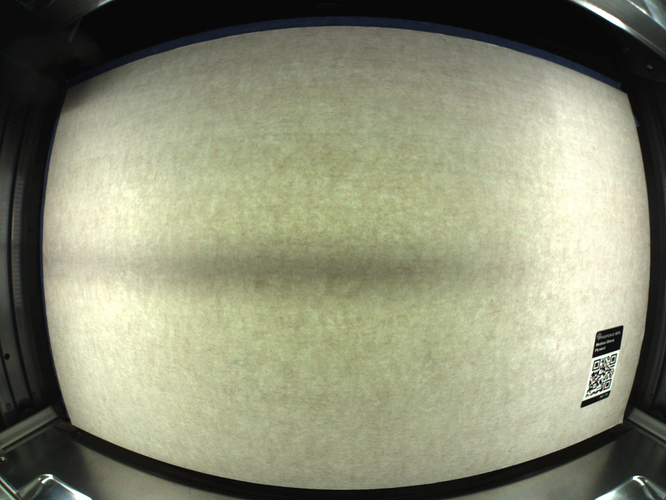 This is with a 0 focus height: 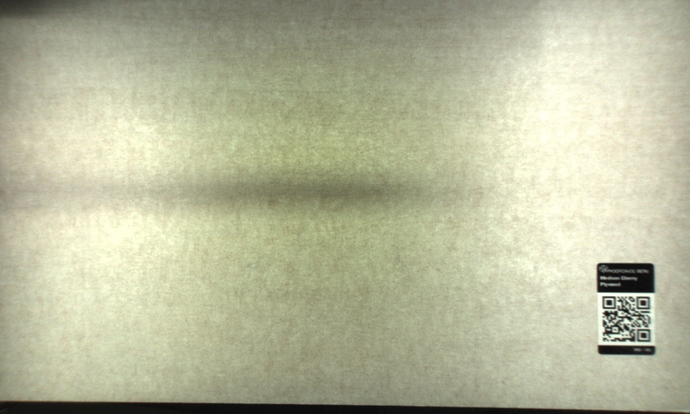 This is with a focus height of 25: 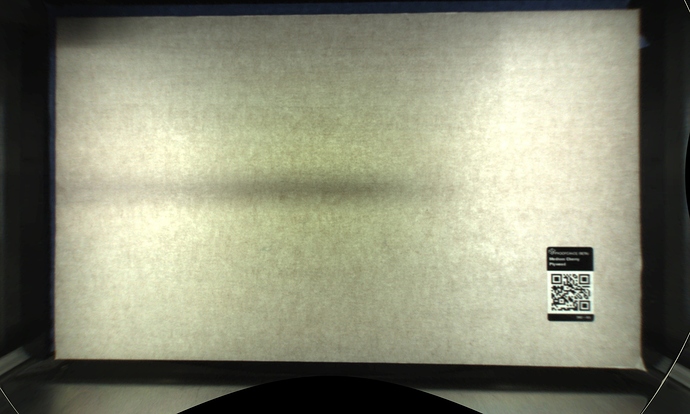 To be completely honest you are the only thing keeping me interested in the GF, Scott.
Another great post

Hey! Thanks for that Scott!
I know you’re just having fun eviscerating your machine and exploring the software, but you are doing a great service to all the gear heads that own one of these by posting your adventures.

I believe this is mm above the bed

Wow - so they do know the metric system exists. Will wonders never cease…

Yes everything below the GUI is metric and so are the belts, pulleys and gears.

Yeah @palmercr, there are a number of facepalm things about the glowforge but this one really takes the cake.

Awesome posts!
I wonder if they’ve changed the software since this post? When I change the focal_height=10 to 20, it zooms out but no warpage, the end of the url is …/corrected.jpg so maybe they fix the image warp earlier in the print job? I loaded a new image and grabbed it as soon as it appeared on the list and it was already corrected.
Also I don’t have any entries with motion_ in the name under Network, most of mine are collect?v=…, the other unique entry beside bed_image is: data:image/svg+xml,… which looks like a regular svg file except it does show values for Speed, Power, Focus and Order, is this the motion file?. I’m using Win 10, Chrome Dev Tools. Thanks!
R.L. Hamm

When I change the focal_height=10 to 20, it zooms out but no warpage

That is correct. The warped image from above is the uncorrected image that comes direct from the lid camera. That image is not retrievable via the web interface, though you can get that image using the /glowforge/glowforge command from the device’s console.

The motion file doesn’t show up until you print. It will appear when you see this screen: 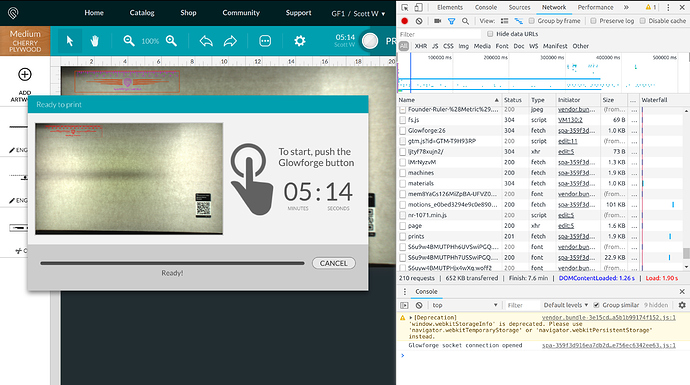 It actually begins with “motions_”. (I corrected the original post.)

the other unique entry beside bed_image is: data:image/svg+xml,… which looks like a regular svg file except it does show values for Speed, Power, Focus and Order

That’s the catalog svg. I would advise against mentioning that file on the official forums, or you’ll likely find yourself banned.

Thanks, I had a feeling that poking around in the DevTools was something I should keep off the main forum, one reason is I don’t want them to add more security and take away options to tweak stuff. I take it you’re the one with the red circle avatar. So here’s my screen after the print button clicked, 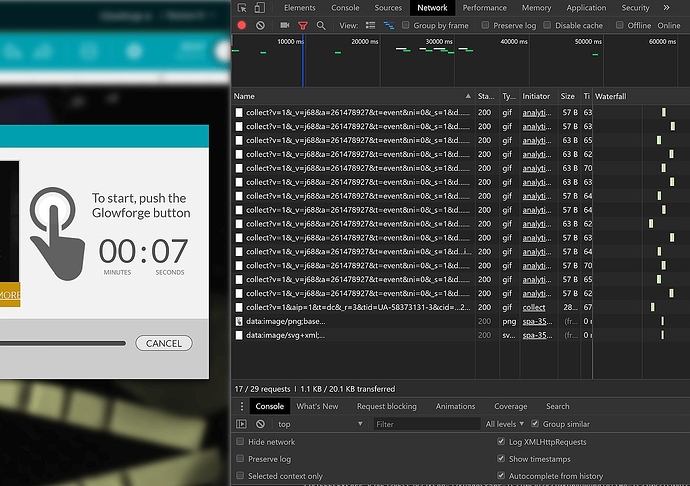 GF%20DevTools1312×925 202 KB
no motions_ , didn’t show up after the actual print either, that’s odd that the file is not on my list. For the warped image, is that the console that you access via the usb cable, as in the part and tutorial you made? I’m probably not going down that road. One of my reasons for accessing the motion file is to see the final scale of an object, on designs where lines are close together and settings matter, rather than making lots of designs, entering settings over and over, I scale in the GFUI, if something comes out perfect, I want to write down details, the inch marks along the edge do nothing for small measurements, I realize they are for general ref.
The xml svg file might show me scaled changes, I’ll have to test on a really simple file.
Thanks,
-=(RH)=-
ScottW514 July 9, 2018, 11:18am #11

When are you opening the dev tool? The activity in your screenshot seems a little light. Mine is filled up and requires the use of the scroll bar.

I take it you’re the one with the red circle avatar.

That’s me. I wasn’t banned, but I stopped participating on their forum after that whole pile of dung happened.

Hmm.
I’ve opened it right after uploading from the app screen, after print click and after glow button, I never get a motion link. It might be a long time if ever that they give us a copy task properties function or a display for all the task properties like I posted on GF forum: https://community.glowforge.com/t/wish-item/25406 I’m not sure if you’ve lurked there under a different email or not, if you are interested in my wish item, I can paste it here. I guess my goal is to edit the motion file, paste it or run it from my domain with all the .js fully pathed and see if that works. I do some print jobs with a lot of colors that I want independent control, if I could cut n paste tasks, basically I need a Git that is a new GFUI, they just are missing so many GUI options, seems like stuff that a basic programmer could write.
Have you seen this? https://elusive-concepts.com/projects/gf-toolkit/gftk.js
-=(RH)=-

Is the red animated preview displayed? That is where the motion file is used in the GFUI.

I’ll have to check tonight, that’s after hitting the glow button on the actual forge right?

I think it previews the paths in red, faster than real time, before you press the button and then in real time after you press it.

I kept the network list open throughout the whole process, from when the design was loaded into the GFUI until the burn was done, watched it the whole time and no motion file ever showed up. Is there another way to capture it short of tapping into the pcb via usb cable? Thanks.
“I’m not trying to be difficult, I just am”
~Hamm, R.L. (2018)

Is there another way to capture it short of tapping into the pcb via usb cable?

Those are pretty much your options.

Though, I’m not sure that the motion file is what you need to accomplish your goal.

The motion file only contains stepper and laser commands. While you can use that to generate images that show the contents, there really isn’t any easy way to manipulate them.

And, if you did, there is currently no way to import those changes back into the GFUI to use them.

The xml svg file might show me scaled changes, I’ll have to test on a really simple file.

Did you ever give this a try? This might be a better path. You should be able to re-import the SVG into the GFUI. That would solve your exact scaling issue, at least.

Bit of a mystery why the file isn’t showing up though. Have they changed something?

It still appears for me. Though, I am using Ubuntu 18.04. I can try and test with Windows.

I don’t think the OS is involved, just the browser. If It doesn’t transfer the motion file to the GFUI I don’t see how it can animate the preview.

@rhgrafix do you see an animated preview in the dialogue box that invites you to press the button? Your screenshot above doesn’t show enough of it.