Exhaust Fan Removal/Replacement on the Glowforge

As the exhaust fan is in the direct path of particulate matter generated by laser ablation, it is only a matter of time before it gets booger-ed up and needs cleaning or replacement. This is not an easy task on the Glowforge, but it can be accomplished. 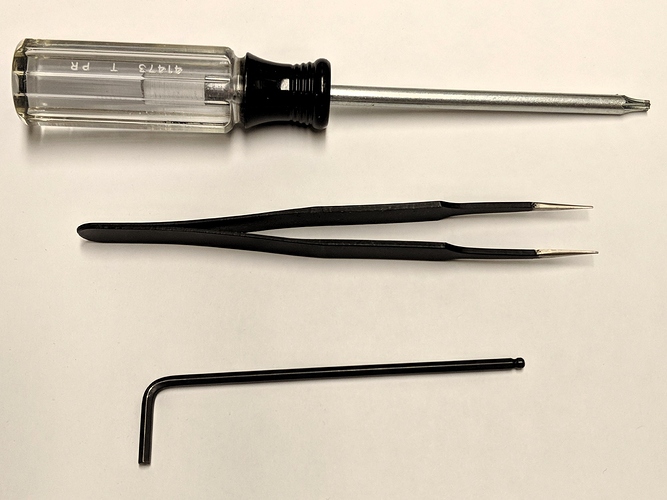 *The ball-end on the hex key is critical. Trust me, you want one.

There are 3 screws holding the left cover in place - one on the left, and two on the right. Use the #10 Torx driver to remove these.
LEFT: 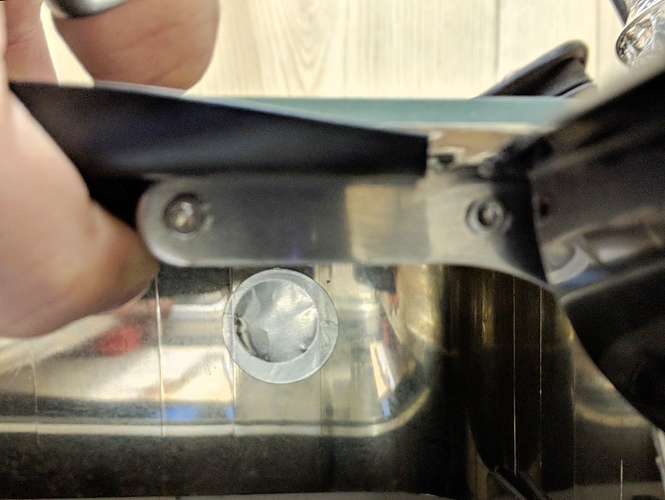 It may be possible to remove and replace the fan without removing the left cover, but I am not brave (or patient) enough to attempt it.

Step 2: Release Locking Tabs and Slide Cover Up and Off

There are 3 plastic locking tabs, hidden under foil tape, that hold the side of the cover in place.

Poke a hole in these, and use the short end of the hex key to pull the tab away from the locking notch on the case. 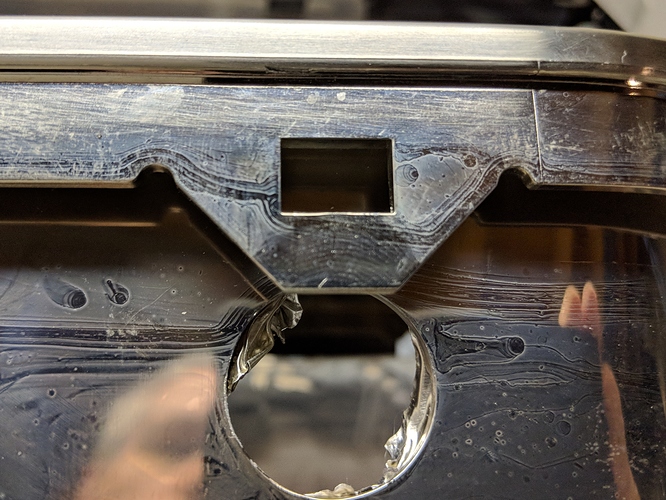 This is not the easiest of tasks. Expect it to take some time, as the tabs tend to lock back in place when you are working on the next one. It may be easier to use a paint can opener* to pull on them. Do not pull too hard, or you will break them.

Once they are all released, the cover will slide up and off.

* @jglazer63 provides the excellent tip to grind the end of the paint can opener to make it easier to fit behind the tabs (see comment below).

I don’t have a Pro, so I can’t comment on this step. Any one with a Pro willing to share pictures and/or your personal experience here?

The fan is secured with four screws. Use the 3mm hex key to remove them. 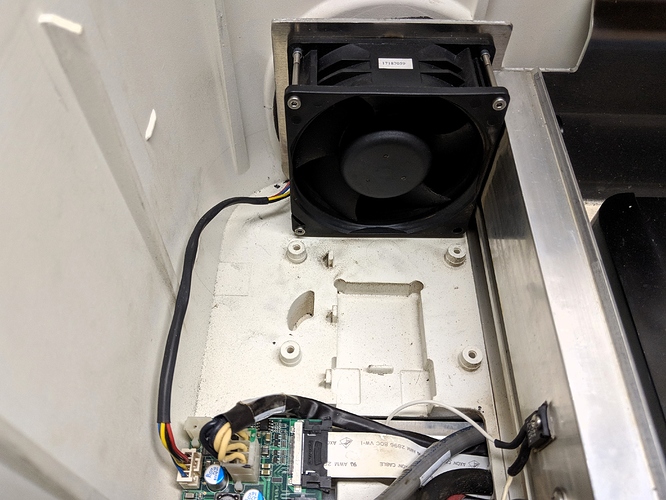 Unplug the fan, and it should slide out with a little coaxing.

Here is the spec plate for the fan: 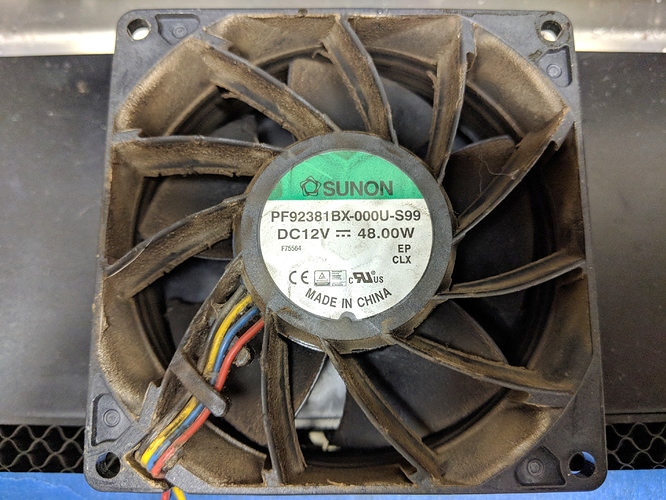 I’d recommend cleaning the finger guard while you’re in here: 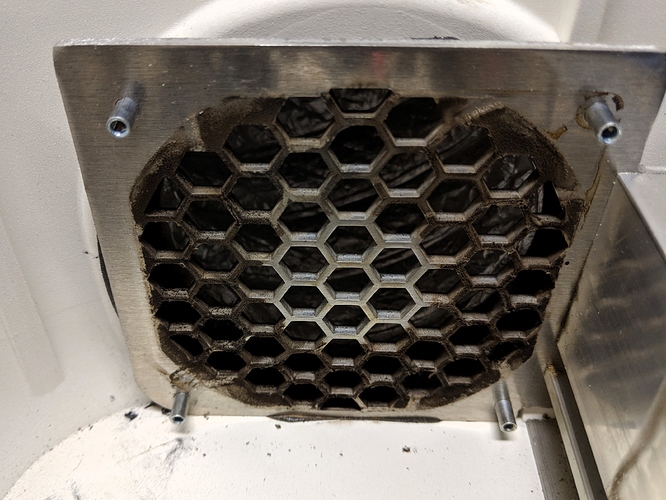 The top 2 screws are easy. The bottom screws are interfered with by the mounting bosses for the cooler and are a bit of a nightmare. The bottom right is nearly impossible. I usually just leave it out, and everything works fine. YMMV

The easiest way I found to get the bottom left screw in is to use a pair of SMT tweezers to guide it into place: 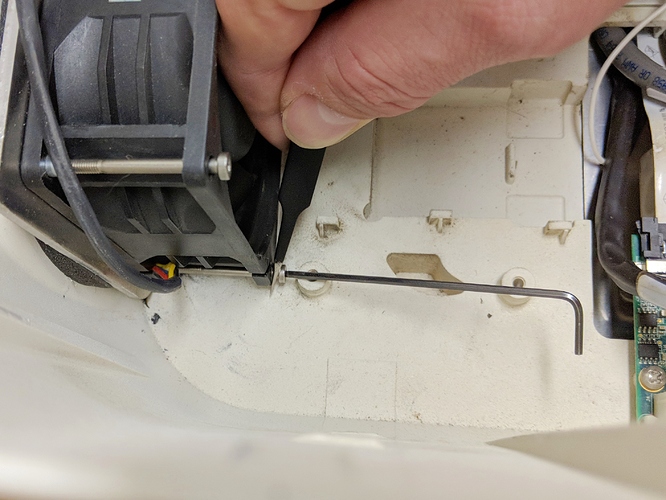 Reconnect the fan, reinstall the left cover and its mounting screws, and fire 'er up!

WARNING: As with everything on this site, USE AT YOUR OWN RISK. Additionally, Dan has suggested (link only accessible by registered users on Glowforge’s official forum) that removing the covers may affect the alignment of the unit .

Seems a really odd choice to use such a chunky piece of metal… Perhaps it is to stop critters getting in. Rodents could chew through plastic. But a normal wire fan guard should be sufficient and a lot better for airflow.

Placing an item that is going to need frequent attention in such a difficult location is also an odd choice.

Placing an item that is going to need frequent attention in such a difficult location is also an odd choice.

There is no shortage of low hanging fruit when it comes time for them to come up with the design for Glowforge 2.

This process is a dream compared to what it takes to change the tube.

The tube slides out to the right, which requires the removal of the gantry from the unit.

If that is the case, then how is it that Glowforge could even begin to think about having user replaceable tubes if, as noted in Dan’s “suggestions” the unit could lose any hope of calibration?

If you remember, they originally were not going to make that an option. The community turned against them, and they changed their position. However, that just meant they would sell you a tube, not that they would give you any directions about what you should do with it. “We are just providing the parts.” ~ Dan

The basic problem with the current calibration scheme that Glowforge relies upon is that it begins to lose it’s accuracy as soon as it is removed from the granite slab at the factory.

If you remember, they originally were not going to make that an option.

At the time of ‘the greatest crowd-funded thing EVER’ campaign they were claiming full user replacability.
I still have a personal e-mail from Dan to prove it, though the Ministry of Truth has erased it from their website.

Very little of what they claimed in the original advertising was true.

At the time of ‘the greatest crowd-funded thing EVER’ campaign they were claiming full user replacability.

My mistake. The outrage came when they backtracked on that statement, only to backtrack again.

Very little of what they claimed in the original advertising was true.

A year after shipping starting, and they still haven’t deployed any of the major missing features.

Thanks for the how-to Scott!

I found the cost of that fan to be just under $30 depending on the vendor. Is there any difference between the CFM of the pro and basic exhaust fans that you know of?
Since the mounting bosses for the cooler used in the pro are there, do you think the board for the basic would support adding one?

Thanks for all your work in support of us owners!

Is there any difference between the CFM of the pro and basic exhaust fans that you know of?

Not that I know of.

Since the mounting bosses for the cooler used in the pro are there, do you think the board for the basic would support adding one?

However, the TEC is controlled by settings contained in the downloaded pulse file, so even if you added one to your basic, it wouldn’t work properly with the cloud unless enabled by the mother ship.

That’s not to say you can’t add one and control it yourself. And, the OpenGlow will support it no matter which model you have.

There is no shortage of low hanging fruit when it comes time for them to come up with the design for Glowforge 2.

This is SO true.

They can complete their conversion to full Apple by gluing in the fan and the laser tube in the next model.

They can complete their conversion to full Apple by gluing in the fan and the laser tube in the next model.

Don’t mention that on the official forum. We certainly don’t need to be giving them ideas! (Although it would probably take them six years to implement so I guess it wouldn’t be the end of the world.)

Wow, this is a major pain. When it’s time to clean my fan, I am going to think about making it mount externally, just on the other side where the finger guard is now.

I don’t know how good that fan is, but it may be worth spending the money on a quality replacement if the GF fan is like the typical Chinese import fans. Noctua makes a quality product, assuming they sell fans with the same specs.

ScottW514, thank you so much for posting this (and for the pics).
I followed your steps, and it as worked great so far (I’m writing this before putting it back together).

I wanted to let you and others know of one difference I ran into on my model (Basic).
The Ball-end hex key needed to remove my fan screws was 2mm, not 3mm. Maybe a difference in later models?
Thanks for the tip that a ball-end key would make a big difference…/.it certainly did for me.

Follow up. I got everything cleaned and put back together. Was not as hard to get it reinstalled than I feared.
I ran a simple score. Fan sounded SOO much better. Like when it was new. Vibrations were way down, also back to original I think.
So, I then ran a simple 2 minute cut. Again, sounded great. But now no smoke is coming out of the front, etc. Almost no smell. I could feel a slight airflow from the front going into the forge (rather than coming out). I take this to mean the case is again seeing negative pressure.