(This is a duplicate of my post in Beyond the Manual on the official support site.)

For those that are interested… A progress update on the OpenGlow:

I spent a little over a month developing the customized bootloader, kernel, and Linux image for my board, as well as bringing up and testing all of the on-board hardware.

Yesterday, I finally took the plunge and connected it to my Glowforge (removing any remaining doubt about the status of what remained, if any, of my warranty

After initial checkout, I’m happy to report it communicates with all of the Glowforge’s native systems (except the cameras, those are more complex from a hardware and driver standpoint and I’m not tackling that part until a little later in the process - though my hardware does have full support).

I currently have some basic control over the machine, and a lot of work still ahead of me… 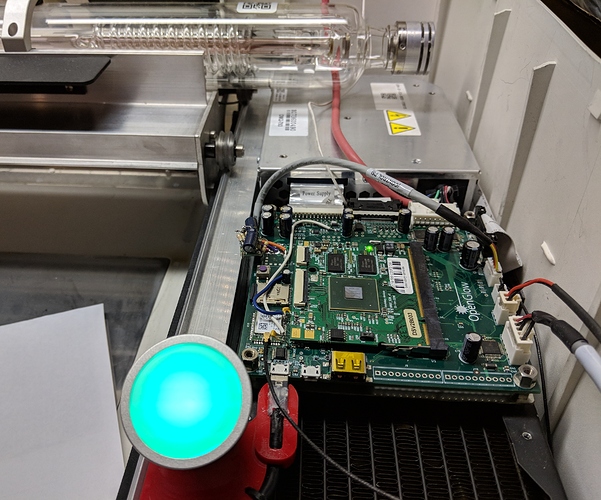 Source code can be found here. In addition to the Open Source code I am making use of, I’m also releasing all of my original work under an open source license. When I have a final version of the hardware complete, I’ll release that under a Creative Commons license.

Looks like that i.MX6 System on Module supports LVDS displays. Would be cool to have a proper display on the cutter.

Also, if you make this thing eat GRBL, then we’ll have some nice software options.

Any chance of an actual ethernet connection?

Looks like that i.MX6 System on Module supports LVDS displays.

It does, as well as an LCD connector.

if you make this thing eat GRBL

While I haven’t committed my development path one way or the other, that’s currently my first choice.

Any chance of an actual ethernet connection?

For this version: No.

The goal for this iteration is to have a drop-in compatible board that doesn’t require cutting a hole your case. The idea is to be simply plug and play.

For the expanded version: Yes!

There are two more mounting screws roughly 1" further to the front (towards you in the photo above), and I plan to whip up a second version that will be a little longer. This will give room for Ethernet and USB jacks to fit through a hole on the right side.

Not everyone will want to cut a hole in their case. Having two versions will give people that choice.

The current board design leaves the necessary I/O’s for the 1G Ethernet components free. It should be an easy revision to make.

Is your board software compatible with the original. I.e. will it run the official GF firmware?

Is your board software compatible with the original. I.e. will it run the official GF firmware?

It is not (one could say ‘by design’). While both are based on Freescale’s iMX6 processor, the hardware is significantly different.

However, I am planning to enable compatibility with their cloud service using the Glowforge emulator.