In a nutshell: The OpenGlow Control Board project is an effort to create Open Source hardware and software to control Glowforge’s Basic and Pro model CNC lasers.

How far along is it?

The project is in its very early alpha phase. The first prototype has been built and is undergoing operational testing and development.

The prototype hardware is based on Freescale’s iMX6 ARM Cortex-A9 processor series deployed on a Boundary Devices Nitrogen6X SOM-v2, and utilizes Trinamic TMC2130-LA stepper drivers for the X and Y axis.

Check the postings in this forum for status updates, and details of the development process. 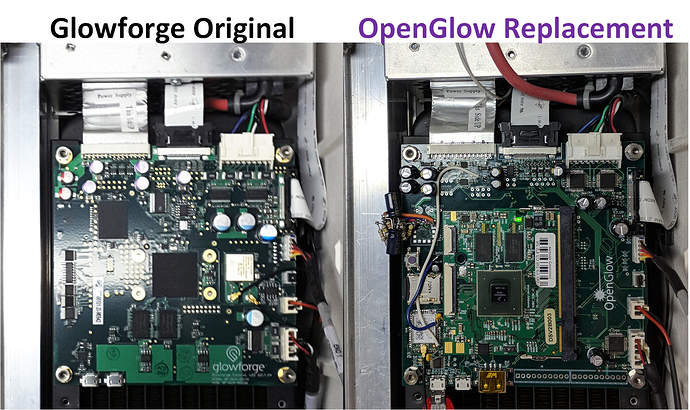 This is fantastic Scott, will be watching this avidly.
From your other posts it seems opening the machine up to do the replacement is not for neophytes though

It will certainly be easier than a DIY tube replacement - and (unlike the replacement tube) I’ll include very detailed instructions.

Will the OpenGlow Control Board allow to switch between the GFUI cloud based UI & a local stand-alone software system? I ask because I’m inclined to use the stand-alone software (I used to run 3.5kw CNC metal lasers…), but I know my wife has grown comfortable with the official GFUI.

The first 2 prototype versions work with the official web UI.

I had started working on a G-Code interpreter for the 2nd version that would be compatible with grbl, so it would work with anything that speaks grbl.

The 3rd version I have been working on (though I haven’t had much time in the last few months to make much progress) may not be compatible with the GFUI. The reason is I am looking at using a Raspberry Pi compute module with dedicated hardware step generators. This is a major departure from the way the GF works, so it may be difficult to get compatibility with the original UI.